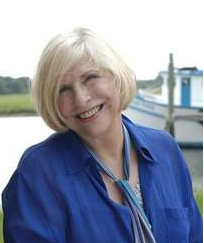 South Carolinian Nathalie Dupree is a best-selling author with 13 hardback and two softback cookbooks and more than 300 television shows for The Food Network, PBS, and The Learning Channel. She has been prominently featured in the New York Times, Washington post, Los Angeles Times, Chicago Tribune as well as Bon Appétit, Food and Wine, Southern Living, Coastal Living, Better Homes and Garden, Redbook, Cosmopolitan, and Good Housekeeping.

She has appeared on The Today Show, Good Morning America, The Morning Show, and CNN Good Morning, among others. Her best selling book, “New Southern Cooking” started an entire culinary movement. She has won James Beard Awards for “Southern Memories” and “Comfortable Entertaining” as well as her most recent book, “Nathalie Dupree’s Mastering the Art of Southern Cooking.”

The Founding Chairman of the Charleston Food and Wine Festival, she also was a founder of Southern Foodways, the Atlanta and Charleston Chapters of Les Dames d’ Escoffier, the American Institute of Wine and Food and the International Association of Culinary Professionals, of which she was two time President.

She writes for the Charleston Post and Courier and does short videos for them, as well as occasionally for Charleston Magazine and The Local Palate. Her husband, Jack Bass, is author of nine books on the American South.

Southern Biscuits
Layered, fluffy, feathery, silky, soft, and velvety biscuits all come together in Southern Biscuits, a book of recipes and baking secrets for every biscuit imaginable.
Nathalie Dupree's Shrimp & Grits Cookbook
The magical combination of shrimp and grits, whether for pre-dawn breakfast on a shrimp boat or as an entrée in the finest New York restaurant can be deliriously wonderful.
Nathalie Dupree's Comfortable Entertaining: At Home with Ease & Grace
A beautiful book, winner of the James Beard Award for Entertaining, that will help the novice and the experienced alike.
New Southern Cooking
The best of traditional Southern cooking, as well as innovative, new cuisine.
Nathalie Dupree's Southern Memories
This book will be a keepsake for anyone with Southern roots, and a practical book for those who like to cook! A winner of the 1994 James Beard Award.
Recipe Index
Master index to all of Nathalie's cookbooks